It has been about two months now since the success of the Kickstarter. Since that time I’ve been showing off some improvements to the UI, controls, and other minor developments, but I’ve been keeping something under my hat. Now, the time is right. Check out some new art for Dungeonmans! 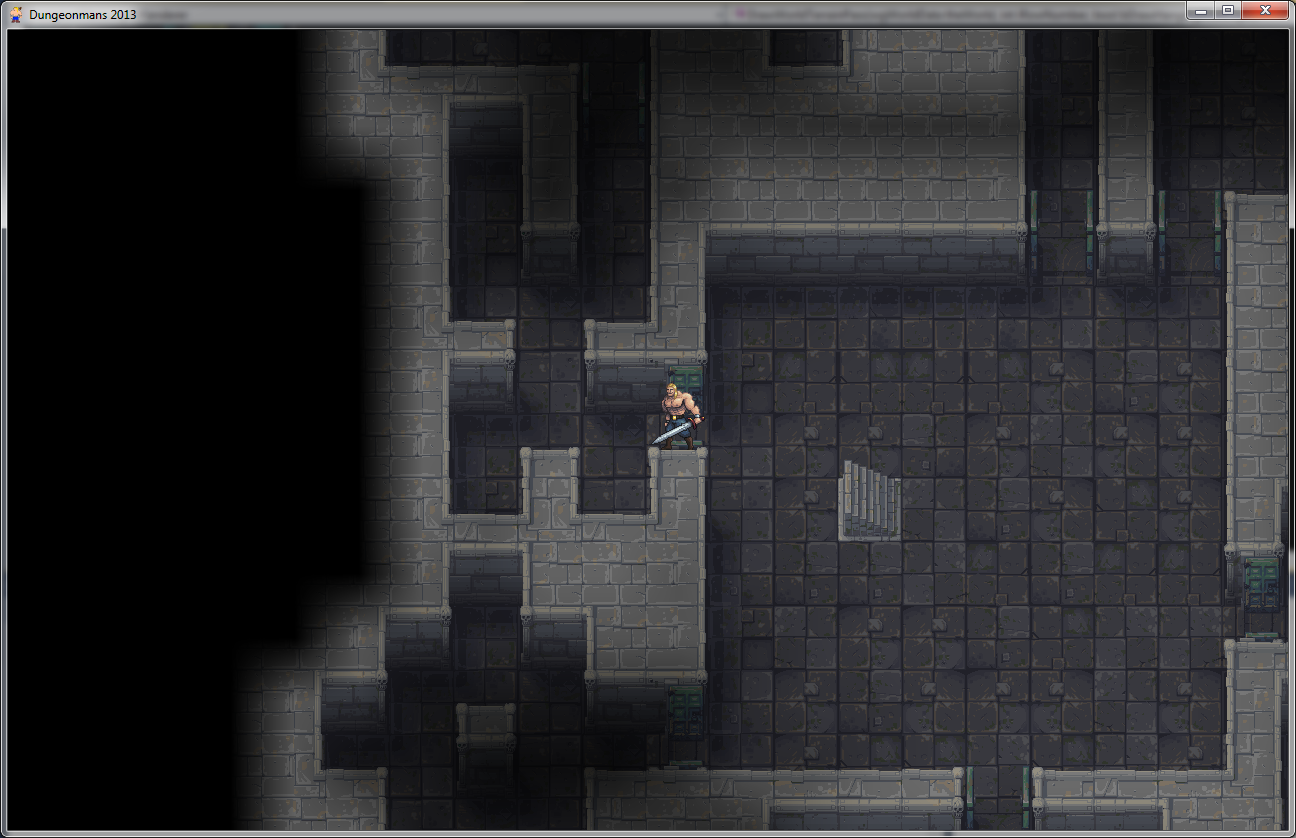 Look at that! Look at it! 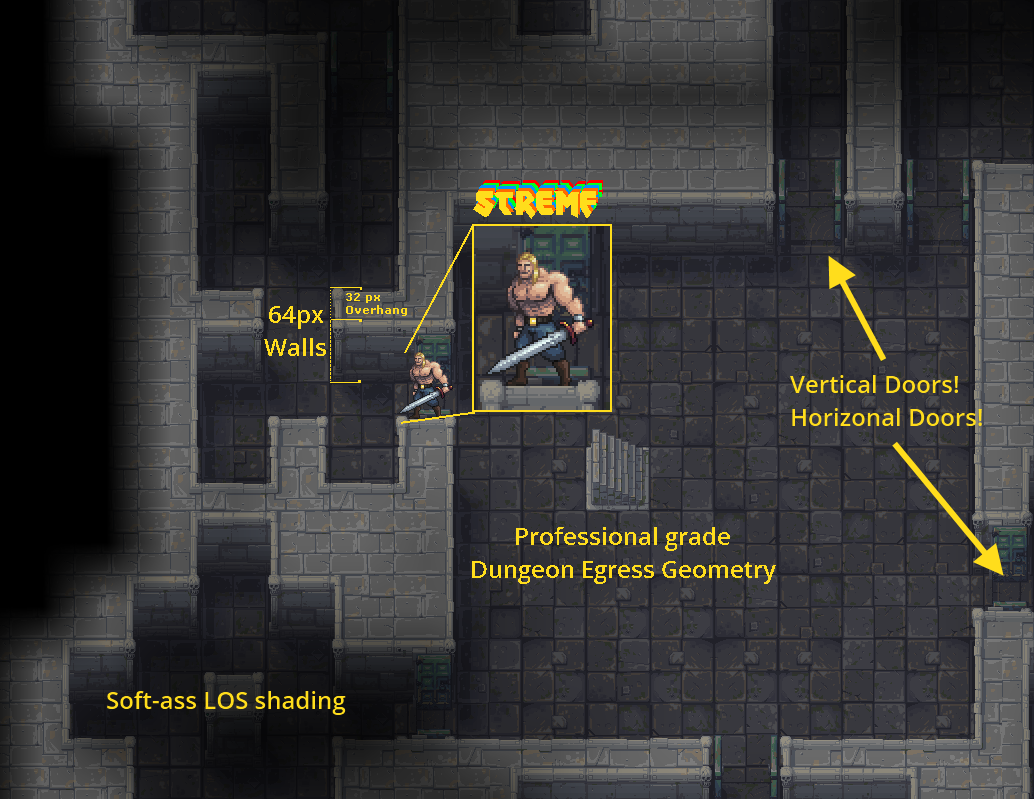 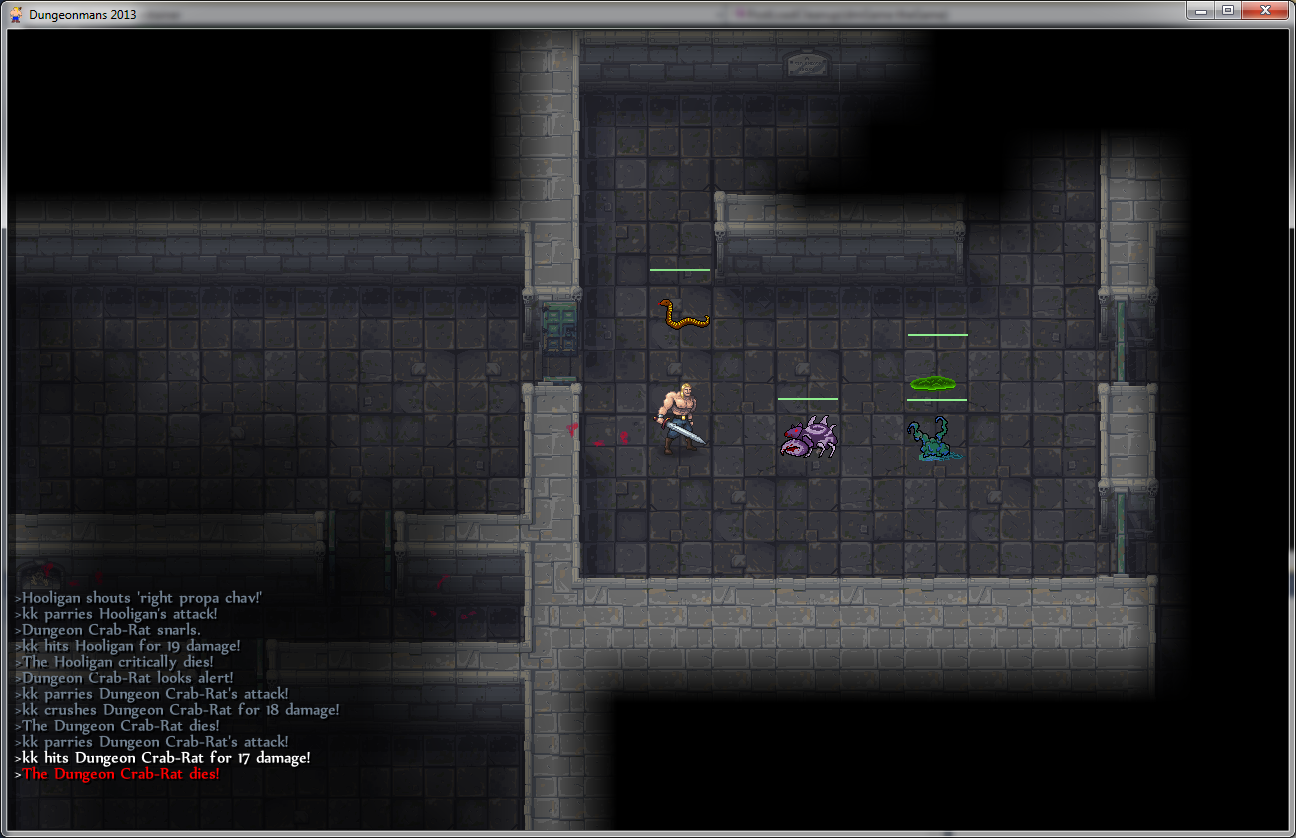 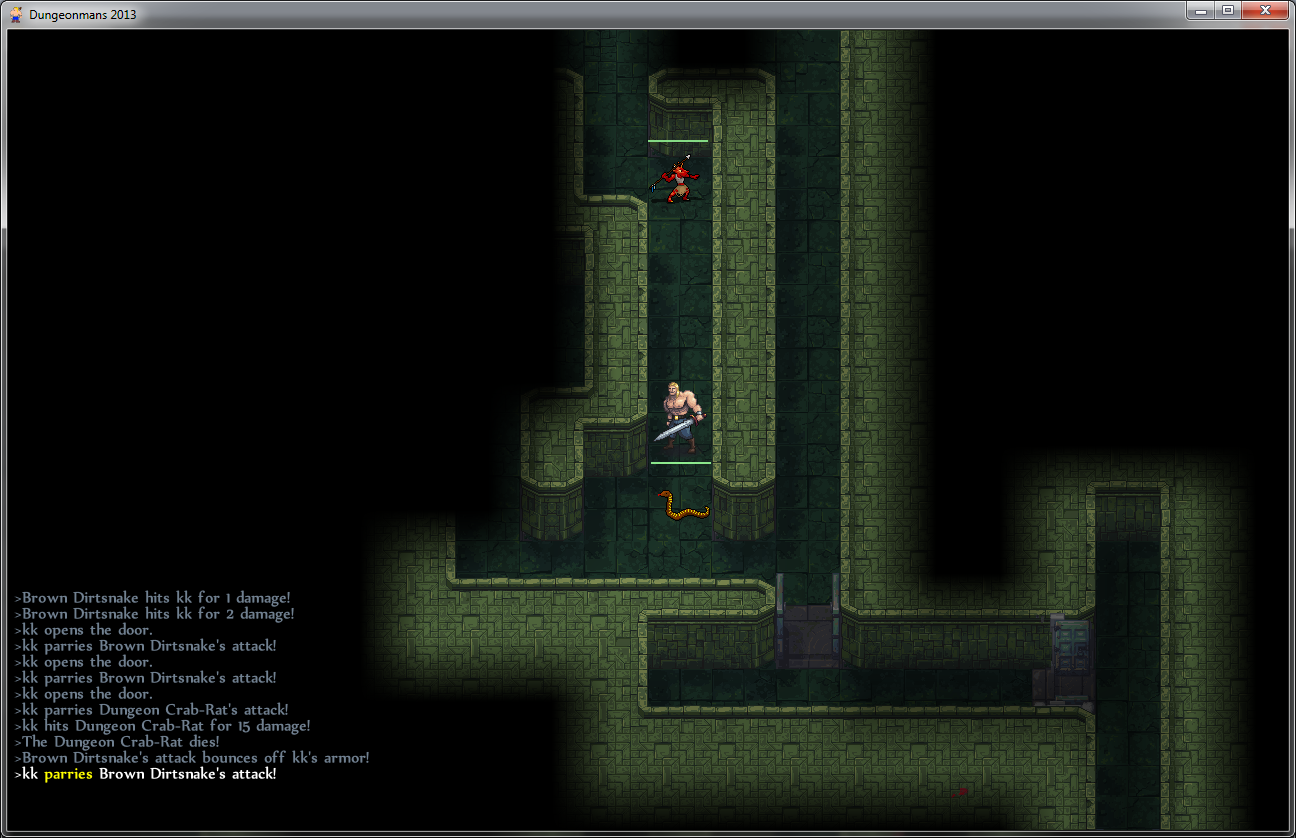 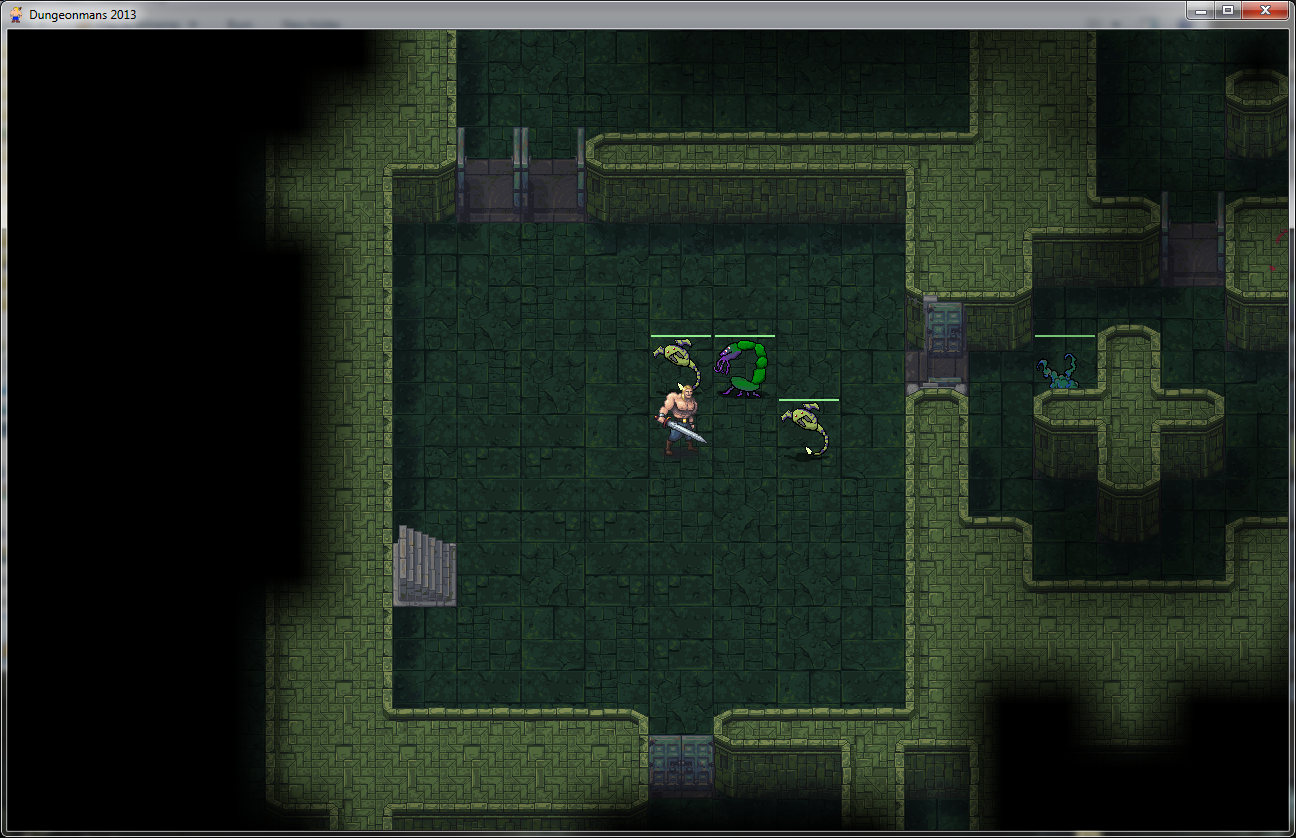 Awesome. If you want to see some of this in action, here’s a short video.

Take a look at what’s happened to the Masteries page. Now a single panel that slides in from the edge of the screen, it’s cleaner, condensed, and more flavorful without sacrificing any of the important information. 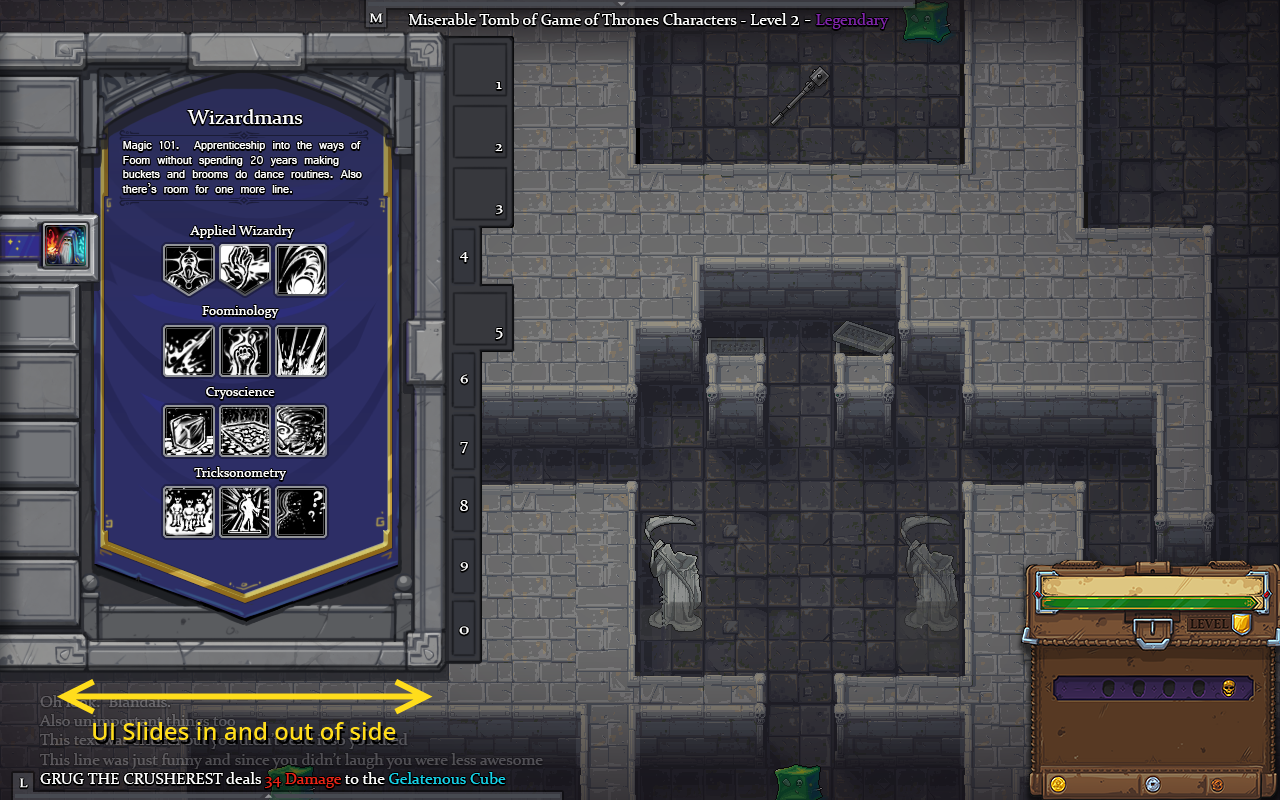 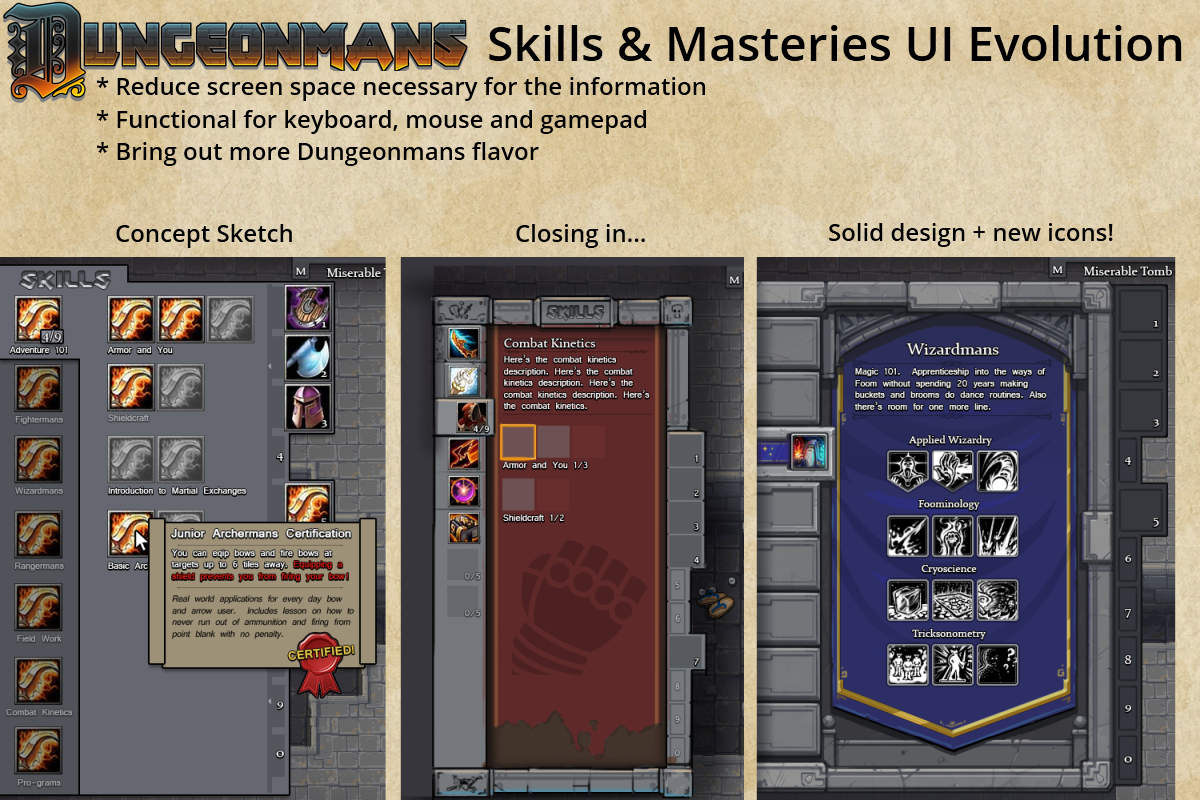 Here’s a WIP of the new health and vitals package. I’ll have this working in game soon. 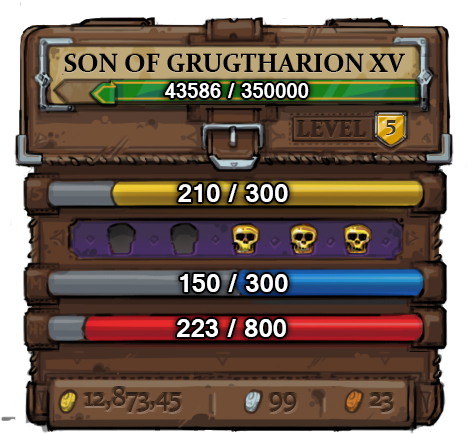 Illustrations and new concepts that bring the world of Dungeonmans to life! Here’s an extended and improved version of Nick’s title screen, along with some sketches for a new piece he’s working on. It’s actually quite farther along than these sketches, but we’ll save that finished work for a later date. 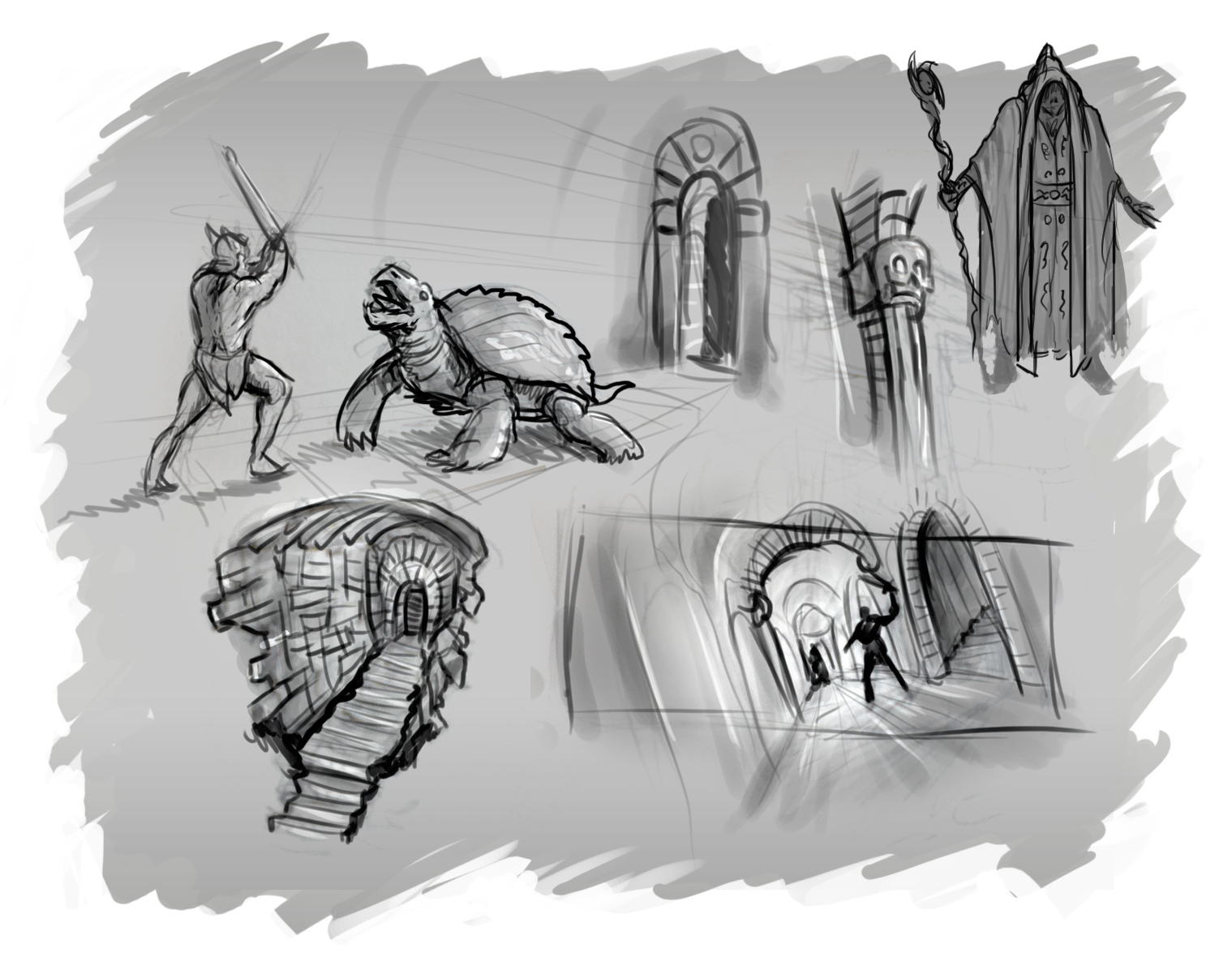 Finally, I won’t have to keep this stuff wrapped up while streaming. I’ll be online soon (maybe today, kinda sore from recent dentistry) and we’ll be able to tour the new environments together live!

A New Art Direction for Dungeonmans

I’m delighted to announce that dear friend and veteran of 1,000 battles Jeramy Cooke has stepped up to the pump and will be directing the core of the new Dungeonmans look. Along with master Item Forgestress Lorraine Herrera and Grand Illustratio Nick Arnold, the future of Dungeonmans is looking better than ever.

As mentioned in previous updates, Jeramy was the very first artist to contribute to Dungeonmans, way back in the halcyon days of late 2009. His colorful and flavorful items and monsters are a big part of what drove me to keep pushing forward with the game and evolve past programmer art. He’s been excited about the project almost as long as I have, and it’s quite fortunate that time and circumstance have aligned in Dungeonmans’ favor.

Those of you who backed at the $25+ level will soon be receiving download codes for two of Zircon’s prior works! Full downloads, bursting with delicious beats and crescent aural freshness. This will be happening as soon as I can figure out how to wrangle these backer email addresses.

Other News Part 2: Indie RPG Bundle In A Box

I’ve squawked about this on Twitter and I’mma mention it here: 13 – THIRTEEN!? – Indie RPGs just sitting here, waiting for you to drop a Ventrilatte Frappom Coffee’s worth of coin and then run away screaming into your basement, playing a mess of games. Cool ideas from independent game makers, some great, others less so, but if you’re anything like me you love peeking into the mind of game creators and seeing the stories they have to tell.

That’s all I got today. I hope you enjoy it! As always: questions, comments, concerns, lay ’em on me.

The last two weeks have been a scattershot of development. Multiple things are happening at once, which is always a little chaotic but it’s necessary if you want to get the most value out of your time. Here’s some of the broad strokes:

There’s some brand new art on the way that will change both the look and feel of the UI as it exists. Easier to read and navigate, suitable for keyboard, mouse, or controller. I can build the skeleton of the new tech without art, but since UI is so much about positioning and specific functions tied to specific buttons, I can’t go in whole hog yet.

Mouse control has lots of functionality now but it remains imperfect. Gamepad control exists for moving and fighting with Dungeonmans but not much else. The combat controls I continue to work on, however there’s an ever greater amount of work to be done making sure that the gamepad can navigate menus correctly.

All of the game data in Dungeonmans is stored in text files, because they’re the easiest to mess with and you can work quickly. Dungeonmans doesn’t really have any tools, but that’s changing now. For small projects, especially with a single developer, you have to be really careful about investing time into making tools. If you spend more time making the tool than you save from using it, you’ve wasted time. Monsters are the one case in Dungeonmans where I’d like to have something more than Notepad to gather, balance, and adjust them.

Using the tool, I can create baseline stats for monsters at any given level, then tweak and adjust them so that they fit the monster and feel right. For example, if the Bandit and Gelatinous Cube are both level 4 they can start with the same base stats, such as health, hit, melee damage, etc. But the Cube is a big slimy cube, so I can increase his health a touch, add some extra armor, and remove his block and parry scores. The Bandit gets no armor, but his parry and hit should be higher than average, nimble swordsmans that he is. Finally, the Cube will take extra damage from fire and ice. Done!

Now, let’s say later that I want to make those monsters level 6 instead. I can change the level, and the base stats will adjust to be level 6, keeping the modifications in mind. Later on, if the feedback from testing shows that 6th level monsters are too easy or too difficult, I can change the core values and all the monsters of that level will adapt. Tool writing isn’t glamorous work, but this one should prove useful.

I know these updates have been lackluster but bear with me, I will have something great to show quite soon. In most cases I have no problem showing things in development, but I want to hold off on showing the art and UI updates until they are just right. It will be worth it!