A horde of horrible monsters, wicked weapons and giant explosions, piles upon immeasurable piles of loot, and strategic combat that will beat down your flabby war-brains until they look like that ripped dude from 300. Except he’s a brain now, and he’s got an armful of swords. 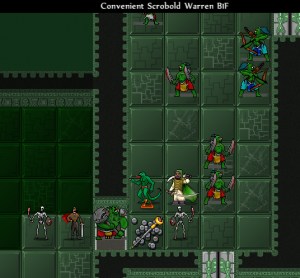 When you get right down to it, Dungeonmans is about stepping up to legions of terrible monsters and taking them apart. Shiny swords, explosions, magic tricks, arrows, whatever, just make sure when you’re done that all the baddies are separated into a smooth ankle-deep mush.

You’ve got the tools to do it. Dungeonmans lets you mix and match powers to create just the hero you want. How many times have you run in with your big sword, lucky to get in one or two swings before your wizard buddy in the robe and silly hat calls in snowstorms full of meteors made of bees and steals all the kills? No more of that. You’ll balance spell and steel, wear heavy armor while shooting a long bow, or maybe be full of sneaky tricks that get you in range to use that giant hammer you’re lugging around. Or maybe you just want to specialize? You go and become the best robe and silly hat wearer you can be, and leave the swords to the mooks on the stink end of your fireballs. 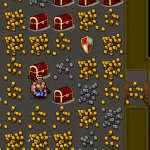 There’s plenty of gear just waiting to be recovered from the severed tentacles and headless lumps you leave in your wake. Weapons a-plenty: swords, axes, hammers, bows and arrows, spears, staves, all of varying quality and make. Walk out of the Academy with some raggedy boots and Yesterday’s Knife, strut back in with huge swords and glimmering shoulders that look like someone vajazzled a linebacker.

Don’t forget about the various other items of wonder. Bubbling fizzy potions, untested wands buzzing with power, and old scrolls scratched out by ancient demons with a D in handwriting. What they do is a mystery, a mystery you solve using knowledge and powerful research, or by crossing your fingers and chugging one of those potions down. Learn more about the mysterious items of the world, and stock up on the good ones for when things get really interesting. 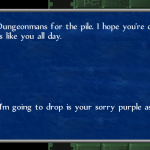 Danger is everywhere in Dungeonmans, and once you’ve made your share of scrobold salsa you’ll be ready to take it to the Champions, serious monsters with powerful abilities and real trouble. Champs lurk everywhere you’ll find monsters, and are usually surrounded by lesser monster admirers, just waiting to be crushed. Did you do a good job lining up your powers and picking up loot? You’ll know one way or the other.

Sometimes the bad guys get the entrepreneurial spirit and form lairs of their very own. Maybe one of them got a lucky shot in on a Dungeonmans of yore and now is the big boss man of his own fancy dungeon. Use everything you’ve got! Set up a Decoymans to soak fire while you dash across the room unloading arrows. Hold up your shield and summon a whirling Coldnado before charging in to hack the opponent to bits. Tap into the Terrible Secrets of Necromansy and bring the once-crushed back into action, bravely holding the front line while you fling destruction from afar. 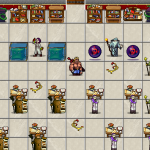 The boldest heroes often end up parked six feet under a heroic statue with a pithy quote. As the graveyard grows at the Dungeonmans Academy, your new heroes will graduate with some of the strength and knowledge passed down by those who crushed before them. You’ll find rare tomes of knowledge or arcane equipment that can be used to expand the academy and give newer students a leg up. If you’re lucky, you’ll discover entire new fields of study to expand the monster fighting power of all your heroes, each generation better than the last.

The world grows as you play, with each hero coming back stronger than the last, all of them working together to forge a legacy of heroic adventure. The dungeon layouts are always new and different, but the villains who need some payback remain. Did some bandit get the drop on Sir Hardfight VIII, ending his career far too soon? Well Sir Hardfight IX can saunter right in and earn bloody revenge, assuming he too doesn’t get added to the pile of victims. 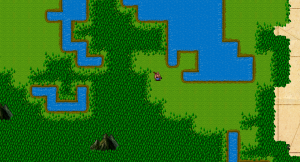 Generations of Heroes from the Dungeonmans Academy.

A sprawling world of adventure, with high mountaintop fortresses, deep cavernous dungeons, and all the locations in between.