Pictures! Here’s some shots of graveyard combat in action. Let’s follow Lady Crushfeld VII as she explores a ruin discovered in a shrouded forest. Get to clicking! 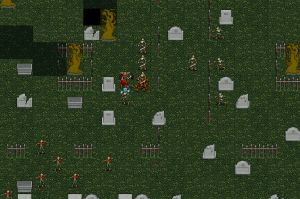 Surrounded! Well that didn’t take long. Zombies are closing in from the south, and a trio of Boneshooters have set up to the east, behind the iron fence. Note that while the fence blocks movement, it doesn’t block Line of Sight. The trees, however, do so. What to do? Execute a Long Jump and try to get next to those Boneshooters? Shield Rush the zombie to the Southwest in order to get distance from the ranged attackers? Or just down a cocktail of potions and start beating the crusty boneshards out of everyone with in arm’s reach while yelling really loud? These are the heavy and ponderous questions one must answer in the rich world of Dungeonmans. 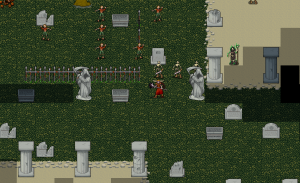 This shot shows Lady Crushfeld VII clearing out some of the fallen temple areas, generally where the good treasure and stronger monsters live. Right in the corner of her vision is a Bone-Damned Apostate, ready to drop all sorts of ruinous green magic on our heroine. The zombies to the Northwest have to funnel through the single hole in the fence, so she’s got time to maybe take cover behind the statue and clear the skeletons, or just try to make an end rush and get to the Apostate before he starts breaking bad with the really unfortunate spells. 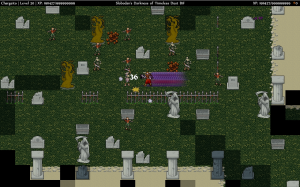 Here is a bold action shot, showing our heroine use Furious Assault against a Defeated Captain. Dangerous foes, the Defeated Captains can use Sound the Sundered Horn to buff the strength and speed of nearby undead, making those slow moving Zombies suddenly a great deal more threatening. Let’s nip that crap in the bud right now.

Finally, a couple of smaller shots showing off things like the Ancient Cryoscientist firing Icy Graveshards at heroes, and of course the opportunity for treasure in the Graveyards opening up old, dusty coffins and sarcophagi.

In other news, there’s been plenty of code written this week and other improvements, but I’m going to keep those in my pocked for the next Thursday update, when I don’t have as many pretty pictures 🙂 back to work!