A great number of RPG combat systems, be they tabletop or video games, have two core defensive ideas in combat. When someone tries to hit you, you can A) Not get hit (Dodge) B) Take the hit and reduce the damage dealt (Armor). That’s a simplification but it applies quite well.

Basic attacks then have four results: Dodged, Parried, Blocked, Hit. If it is a hit,

1) Roll the damage.
2) Subtract the Defender’s Armor Value (AV) from the damage.
3) Whatever is left gets through.

At a quick glance, it seems like the best way to not get hurt is to Dodge all the attacks. In other words, stack DV to the ceiling and laugh at clumsy monsters. AV is great but the massive blows from an Orc Hosshammer still hurt if they connect, right? Who wants to deal with that?

The problem I have with that is both mechanical and thematic. Mechanically, what’s the point of putting heavy armor in the game if nobody cares to wear it? There needs to be a choice there and it should matter. Thematically, there’s something awesome, one might even say metal about a hero covered head to toe in glistening plate mail, wading through the feeble attacks of the soon to be crushed and laughing the whole time. Go on and hit me, I’ll even let you swing first.

How to solve this!? Here’s some ideas that I’m implementing:

1) AV matters, it can stack pretty high and with the right gear and masteries, you can shrug off many attacks.
2) Some enemy special attacks have very high hit chances or don’t miss at all. These aren’t bread and butter attacks but they happen.
3) Heavy Armor won’t ruin your DV. It will reduce it, but not make enemy missing impossible.
4) AV will still protect against some magic attacks. Force based attacks (like your typical Magic Missile) are absorbed the same as regular blows.
5) Heavy Armor pieces are slightly more likely to have better magical bonuses on them

There’s concern that this might be swinging too far in the other direction, which I’ll have to keep an eye on. Balance balance balance. The ultimate goal is for players to have a choice and have multiple avenues to succeed. It’s true that there will be one mathematically superior build, above all others, my hope is that the other builds are close enough to not make it a big deal.

Here’s some screenshots! First, my pass at in-dungeon mapping, I’ve had this look in my head for a while now and I’m happy to see it. Second, a Necromanser is caught in a Road Battle, bravely breaking up a barricade set by filthy punks who want to shake down poor travelers. Man, that dog is big. 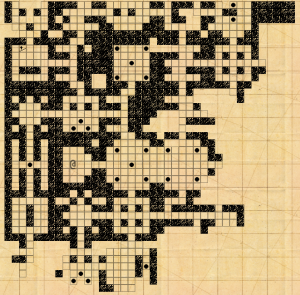 But where are the secret doors? 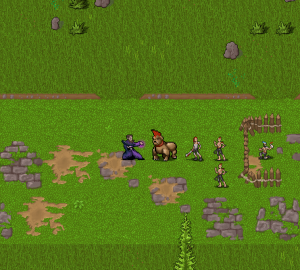 It’s not Arathi Basin, you can fight on the road.