The Quest! Is there a more noble or traditional mark of heroism? The Holy Grail, the Golden Fleece, the Sword in the Stone, Gilgamesh, Ponce de Leon: great stories of bold heroes setting out into the unknown to risk everything in pursuit of a distant goal. A great quest has been the bedrock beneath countless pieces of literature throughout human history.

Then, there’s quests in video games.

Most roleplaying games need structure. Go here, do this, execute steps A, B and C in order. The plan being that along the way you’ll learn something, find unique challenges, maybe even have a laugh or two. Tutorial quests, lore quests, epic endgame boss quests, there’s a pile of them everywhere. From themepark MMOs to sandboxes like Skyrim, you’ve got quests. So how about roguelikes?

Procedural content is usually anathema to quality quests. An early build of Dungeonmans in 2010 used a simple questing system to give extra motivation to heroes heading down into the dungeon to crush monsters. I had thought a splash of humor would help, and since players were going to be killing scrobolds and bandits anyway, what’s the harm in giving them more coin when they return to the surface with a fistful of Scrobold Palps? The harm was: it’s boring. It didn’t add anything. Unless I was going to find a way to make procedural quests truly interesting, why have them? So they’re gone.

Not to say that roguelikes can’t have quests. Elona, for all its wackiness, has a quest system that encourages travel, crafting, and fighting small packs of monsters. ADOM is full of quests, though you can’t really call them procedural as they mainly focus on killing specific, named monsters that are the same each playthrough. However, even in those games, the quests become a sort of background noise, just a series of steps to take and hurdles that need jumping. The real fun seems to come from the crazy situations players end up in, the terrible foes they faced and their clever escapes– real roguelike magic.

A couple of screenshots ahead. The first is an early look at the Cave art style. I’m quite a fan of Bobby’s floors and walls, I think this is another great example. Caves in Dungeonmans contain large areas (one might say… cavernous!) connected by winding tunnels with forks and branches along the way. This particular one might be a little bare, but there’s always room for stalagmites! 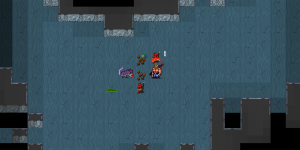 This here is an early pass at mapping the overworld. There’s a great many locations generated by the game and I figured a map would need some sort of legend, generated based on the location you’re in. The legend will have more information eventually: whether or not a dungeon has been cleared, or specific interesting buildings in a given town. This is a good start. 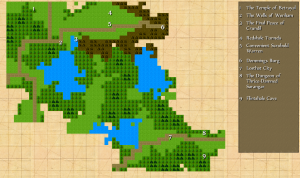 That’s all for this week! I’d love to hear your thoughts on quests, procedural content, the screenshots, whatever! Conversations both here and on the Dungeonmans Facebook page are always a delight!